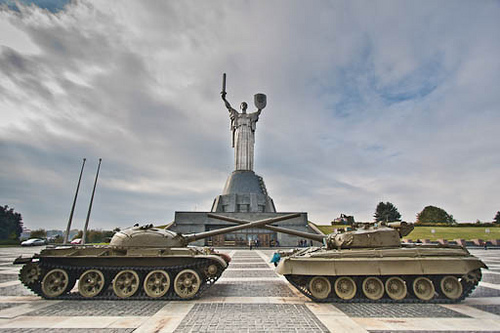 The National Museum of the History of the Great Patriotic War (of 1941-1945) (Ukrainian: Національний музей історії Великої Вітчизняної Війни 1941-1945 років, Russian: Национальный музей истории Великой Отечественной войны 1941-1945 годов) is a memorial complex commemorating the German-Soviet War located in the southern outskirts of the Pechersk district of Kiev, the capital of Ukraine, on the picturesque hills on the right-bank of the Dnieper River.

The museum has moved two times before ending up in the current location where it was ceremonially opened on May 9 (the Victory Day), 1981, by then Soviet leader Leonid Brezhnev. On June 21, 1996, the museum was accorded its current status of the National Museum by the special decree signed by Leonid Kuchma, then the President of Ukraine.

It is one of the largest museums in Ukraine (over 300 thousand exhibits) centered around the now famous 62-meter tall Motherland statue, which has become one of the best recognized landmarks of Kiev. The museum has been attended by over 21 million visitors.